We had a great time learning about fencing in gym this past week.  We learned a lot about the basic moves and weapons of the sport.  We had the opportunity to try out different weapons, and wear the proper clothing used in fencing. 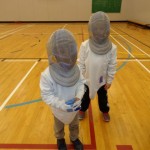 Allez–French for “go”, command used to commence action in a match

Attack–The initial offensive action made by extending the sword arm and continuously threatening the valid target of the opponent.

Sabre–A fencing weapon with a flat blade and knuckle guard

Thanks to the PAC for funding this great opportunity! 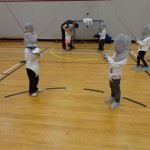